There are so many stories out there about couples who are struggling with infertility issues or other reasons and why surrogacy is their only option to have a baby. Yet, the narrative we hear about surrogacy is mostly horrible and untrue. One of the most damaging myths is that women simply don’t want to ruin their bodies by getting pregnant. This is the furthest thing from the truth. There are dangerous conditions and a million other valid reasons why a couple or single person may choose gestational surrogacy. Vanity is rarely anywhere near the top.

One of the most famous advocates for surrogacy is the reality tv queen herself, Kim Kardashian. She has a dangerous condition called placenta accreta, which is where the placenta attaches too deeply to the uterine wall. This is why Kim chose surrogacy, not to maintain her perfect hourglass figure and she is not alone in choosing this path.

While more and more people are having children through assisted reproductive technology, there remains an air of mystery, misunderstanding, and skepticism around gestational surrogacy. It is not the first option that most people think of when they imagine starting a family and having a biological connection, but for some, it is the only option. 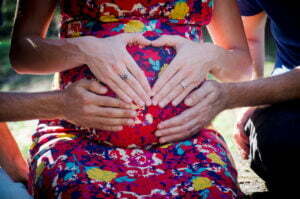 We live in a world with new ethical and medical choices, so let’s talk about it.

Gestational surrogacy is not an easy choice for most couples to make. For many heterosexual couples, it comes after a long agonizing process of trying to create a family the way societal norms tell women – via getting pregnant naturally. When this is not possible for heterosexual couples, it can be hard to accept. Whether the reason is unexplained infertility, multiple miscarriages, immune issues, etc, it is generally a painful decision to have to turn to gestational surrogacy.  Most women have dreamt of carrying their own child since they were young girls themselves.  So with reality comes giving up the fantasy. The couples that do decide to go the gestational surrogate route have great concern and compassion for the woman who gives birth to their biological child. For same-sex couples, they may not have struggled in the same physical or mental way, but the decision to go down this path is not an easy one – either emotionally or financially.

Surrogates, too,  have risks involved – their health, emotional well-being, personal responsibilities, even their families get involved.  Many articles or theories reflect poorly on the women who decide to become surrogates, that either they are doing it for the ‘money’ or are somehow pressured into it.  In the United States, there is nothing farther from the truth.

This is why we must advocate for the legal protections for the surrogacy process, to mandate the things most doctors and surrogacy agencies already ensure. We must work with reproductive lawyers to ensure an equitable contract that protects all parties and the overall process. The misunderstanding of the motives and the realities of the surrogates and the intended parents who pay them can be damaging to both sides.

But beyond the legal considerations, surrogacy (like many other things these days) has become political. And the politics vary state-by-state.  Some states will only allow heterosexual, legally married intended parents where both parents have a biological connection – this obviously excludes single men and women, and same-sex singles or couples, and other states will allow married couples with only one biological connection. However, an important thing to remember,  is that the laws are based on where your SURROGATE lives, not where the Intended Parent lives.

While the arguments against surrogacy can raise valid points: 1. Paid surrogacy commodifies women’s bodies and 2) it’s not a purely altruistic act, because of the financial considerations, there are so many reasons that are pro-surrogacy.  Reasons that are now coming from the once unheard voices of all the people who could not have families without the help of gestational surrogates (couples facing infertility issues, same-sex couples, older single men and women, etc) as well as the now very vocal celebrities, politicians, etc having children via surrogacy.

The fact is we are allowed to be paid to do a whole bunch of dangerous things such as going to war or playing sports. Yet, women deciding when they will or will not be pregnant is still in the hands of lawmakers. Also, this idea that surrogates are too dumb or naive to consider the risks of surrogacy is extremely condescending to them. And the concern of someone accidentally becoming a surrogate is a laughable idea even for a Hollywood movie, let alone a reality that would ever happen. Surrogacy agencies and doctors have strict guidelines to follow that involve physicals, psychological evaluations, background checks, legal representation and contract review, and many conversations about the whole process.

While people will question a woman’s motive for becoming a surrogate,  saying that the money negates any sense of accompanying altruism, the fact is we don’t question a soldier for wanting a salary. And we do not questions whether or not he/she is being patriotic, so why should we question a surrogate’s? Both motives can be true and valid.

It is time that we squash these concerns about surrogacy and support the creation of laws and contracts to protect the people involved in this process, not those standing on the sidelines looking in.